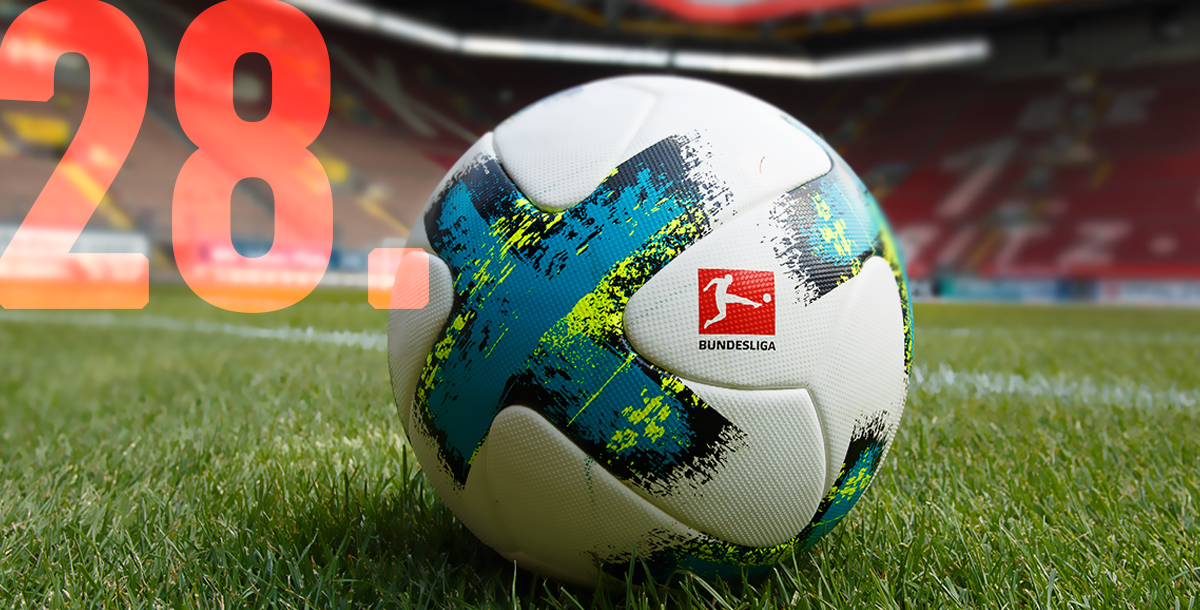 Read WettenTips’ article with football betting tips and predictions for the 28th matchday of the 1. Bundesliga with games like Eintracht Frankfurt vs VfL Wolfsburg or VfB Stuttgart vs Borussia Dortmund. German football matches that will provide excitement for many sports betting fans this weekend.

There is a lot at stake this weekend, preliminary decisions for the championship, qualification for the Champions League, Europa League or Conference League or, at the other end of the table, a relegation battle.

A scenario made for tingling entertainment with sports betting of all kinds. So that you can optimally prepare for your bets this weekend, we at WettenTips provide you with some great 1. Bundesliga betting tips and football predictions.

There are nine matches scheduled for the 28th matchday of the Bundesliga this coming weekend, with every team in action on this matchday. Regardless of which end of the table the German teams involved are at, nothing has been decided yet this season and the number of exciting football matches on the schedule will very likely have impact on the outcome of the reckoning in the 1. Football Bundesliga.

Here are the schedules for the 28th matchday of the Bundesliga, scheduled for Friday, Saturday, Sunday and Monday:

There are certainly a few football games on this matchday that will make the hearts of sports and betting fans beat faster, the top game is certainly the clash on Saturday evening between VfB Stuttgart and Borussia Dortmund.

Both Bundesliga teams are fighting for a place in next season’s European Cup, but while VfB Stuttgart would see this as the crowning glory of an exceptional season, Dortmund would be disappointed to qualify for the Europa League.

The betting odds see Dortmund as favourites in their away match, but many will remember the crushing 1:5 first leg defeat in which the Stuttgart football team lived up to its reputation as a surprise team.

So there is no reason not to call this match the 28th matchday of the 1. Bundesliga a top match and without question also a match of high interest for your bets.

Frankfurt vs VfL Wolfsburg For The Bundesliga Matchday 28

However, there are other promising match-ups this weekend. For example, with Eintracht Frankfurt and VfL Wolfsburg, two teams meet that are on course for the Champions League. Both football teams have lost only 3 Bundesliga games so far in the 20/21 season of the 1. Bundesliga and only 1.FC Union Berlin (12) has played more draws than Frankfurt (11) and Wolfsburg (9). Our betting tips for this match is therefore unsurprisingly a draw.

FC Bayern once again enter the 28th matchday of the 1st Bundesliga as sovereign league leaders after winning the top match against RB Leipzig last weekend. In between the Champions League quarter-finals, the question is whether Hansi Flick’s football team will try to save some energy against 1. FC Union Berlin.

The Bavarians should be prepared, however, as the footballers from Germany’s capital were already able to snatch a point against the German record champions in the first leg against our predictions. Even though our betting tips for the Bundesliga match sees FC Bayern in front, a bet might also be profitable if betting fans go for a surprise.

Predictions For The 28th Matchday Of The 20/21 1. Bundesliga

Of course, WettenTips would like to offer the best possible scores prediction and 1. Bundesliga 28 matchday betting tips.

Here are our predictions for the Bundesliga 20/21 Matchday 28 clashes:

Players To Watch Out For On The 1. Bundesliga Matchday 28

In the absence of the injured and ill Robert Lewandowski and Serge Gnabry, once again Eric Maxim Choupo-Moting could play a key role for FC Bayern on this Bundesliga matchday, even though the footballer, who also plays for the Cameroon national team, has only scored 1 goal in the Bundesliga this 20/21 season.

His teammate Thomas Müller is more on target and will surely be in the thick of things again this weekend. 10 goals and 15 assists have already been collected by the impetuous FC Bayern attacker this Bundesliga season, but against this weekend’s rivals, 1. FC Union Berlin, he managed neither a goal nor an assist in the 3 Bundesliga comparisons. The analysts from our betting tips and predictions team believe he will end that streak on this matchday.

What are your predictions for the next matches of the 1.Bundesliga?